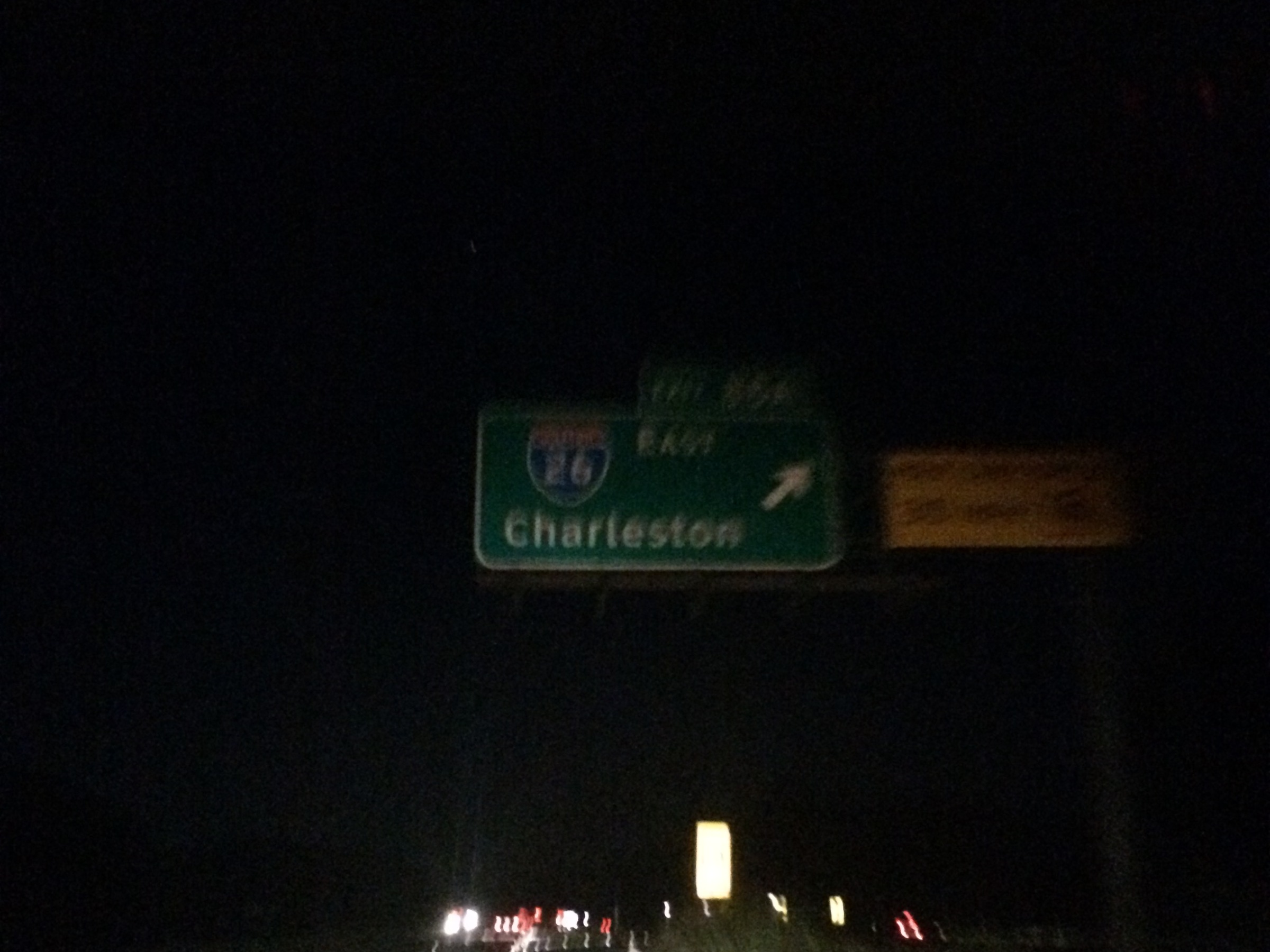 This is capturing me with an intense sensation of delirium; meanwhile, I can still find the cognitive skills and the capability to drive this vehicle.

“Jesus man,” I said while pulling myself toward the wheel.“I have gone rogue in this cruiser and still, the cops have been dispatching my profile to every station out here.” The police transmitter was busy with chatter, throwing trucker talk in with the regulated police dispatch codes. “Where is their sense of professionalism?” I thought, “I mean I’m taking my job evading these bastards quite seriously, for me it’s a matter of life or death.”

Everything to me above the surface was mutually casual, but from within, I felt like a deranged animal that broke free from the zoo. All I wanted was solace, a place to be left alone, fully cured of this restriction. I don’t want to be incarcerated with guards feeding me at certain times a day and spectators gazing upon my habitual lifestyle through Plexiglas and barbed wire.

“No, no, no, no man” as I shook the thought away, “I will be alright, just a few more miles to the destination she wrote on this post-it. “I’m sure she will know what to do from there, just keep cool and keep driving . . . keep cool and keep driving.” I said, shaking at the wheel. The sirens felt like they were getting closer as the road was becoming longer. I jerked my arm forward with the gear shift in my grip, pushed the pedal to the metal with a stomp that caused my head to quark over my shoulders and my body to jolt with the momentum of the car.

It was only this morning when these bastards mistaken me for a criminal, I thought to myself, “I never shot anyone? I’m just borrowing this car.” I remember too well, if not better than this morning of what had happened last night. I was sitting in my lofty apartment when I had a sudden itch to catch the next bus into town for a drinking binge. “I can’t believe I fell off the wagon again, or is it considered hoping back on the wagon?” I didn’t care at this point while scolding myself striking the wheel with a fist. When I got to Pad’s that night, I began to drink until . . . until, until I ordered two kettle bombers, one for me and one for Deidra. “Deidra!” I said, “She was the one who invited me back to her apartment, and the culprit in all of this.” I peered off into the distance with an anguished breath, “But how did I get there?”

“Come on baby; take off those pants for me!” Deidra was dressed in tassels and barely anything else at the point when I was a few more drinks away from being kettle bombed. “Deidra,” I said in my drunken stutter, “I . . . I am wasted, like there are white spots in parts of my vision that prohibit my ability to function properly.” Deidra was on the bed frolicking her fragile body as if she was engaged in a photo shoot—trying to seduce me in some way, but unfortunately for me, the white spots denied me the pleasurable spectacle. I never once experienced side effects of that caliber from an excessive night at the bar. In that moment, I thought to myself, “This person may have poisoned me . . . oh shit.”

“I may have passed out by then?” I said in bewilderment. The police dispatcher was roaring with intensity as the gears of the car were shifting from third to fourth gear. The chatter brought me closer to the edge of deciphering what led me to driving this cop car. It was Deidra’s; I saw the badge and gun on the bed table when I got to her place. The road was rough with pot holes and bumps, propelling the axils to grind against the suspension as each crevasse in the road hit the revolving tires. “Come on man!” I said while trying to avoid the fractures in the road, “before the apartment—think!” I slipped back into a mild stasis while driving trying to remember, “We were both drunk at the bar, really shit-faced. We must have taken a cab.” I said to myself while nodding trying to stay focused.

The sensation intensified the pulsating in my head as flurries of a numbing pain were dispersed within my veins. It was getting harder, much harder to sustain my concentration on the road. “I need to get to her damn it! She probably has the cure.” I thought while glancing at the post-it.

Again, I retracted my memory to that night; the crash on the floor hurt, but my whole body was numbed-out by the exceeded ratio of the alcohol content that was coursing through my veins. The next thing I remember was waking up to a post-it note next to my head that read, “Meet me at the diner off route sixty, take the cruiser”. I stumbled with confusion toward the bathroom to relieve myself of a potential bladder explosion. “During the piss . . . !” I exclaimed gripping the wheel with excitement. “It was during that time in the bathroom that I felt utterly terrible! My body shook, I began to see spots again, and I spewed green vile all over the bathroom floor.” It was beginning to make sense now, “I was poisoned, but with what? What’s causing this disorientation?”

“Let’s see,” I said, still managing to stay between the yellow and white lines of the road, “I made my way to the cruiser, and left for the diner sometime before 12 this afternoon. It wasn’t until recently that these sirens began chasing me.” I peered into the rear-view mirror and caught a glimpse of a police cruiser that was catching up to me, I diverted my eyes toward the speedometer, “I’m pushing 150 on this puppy, and that’s about the extent of how fast she can go!” I said, quite worried. The cruiser seemed to thrust itself to exhaustion as smoke whipped up from underneath the hood, and wind-tunneled up in the air. “Shit!” I said banging the roof of inside the car, “How am I going to explain this, I feel like I’m trippin’ on shrooms, and dying at the same time!”

The car slowly came to a gradual halt. The pursuing police cruiser caught up within seconds and screeched to a full stop – just paces behind me. I poised my stature to greet the officer in the most casual way, but before I could see him eye to eye, he was at my window asking me for my license and registration; railing me with questions about how I have a registered police cruiser in my possession.

After minutes of his inquisition, I began to explain, “Officer, I am in a dire situation that calls for immediate action, I believe I have been poisoned and . . .”

The officer shifted his sun glasses to the lower bridge of his nose, “Poisoned?” he said, “Your situation just keeps getting better and better for you, doesn’t it?” he throws his head toward me as I was just sitting there, taking the beat down of his sharp words, “This is the way I see it, you were driving 150 mph,” he raises a stern finger, “85 miles above the speed limit in a police vehicle that has been reported stolen a few weeks ago!” He ended his short little tangent biting his jaw line, staring straight into my face with an angered look. “Pop the trunk bud.” He said.

“You don’t understand officer. . .” I started to argue with him, but somehow I felt he was the stubborn type that only cared about catching the bad guy.

“I don’t want to hear it, I notice that there is something dripping from your trunk, I suggest you open it before I whip my pistol out on you!” he began to reach for his gun while talking to me, looking at the trunk. I opened the door to investigate what he was talking about. “Hold it right there sir.” The cop started to walk toward me with a strict tone in his voice, “Put your hands on the roof of the car and don’t do anything stupid.” I began to defend myself in this state of delirium that started to overwhelm me.

“Officer, I have no idea what you are talking about, I met this girl . . . uh . . .” I threw my hands on my head trying to remember, “Deidra! Deidra, this car was parked in her drive way!” The Officer began to cuff me and then walked me to the rear seats of his cruiser. After he slammed the door on me, I noticed he was calling for back up from his radio harnessed at the shoulder. It wasn’t until he opened the back trunk of the cruiser where I was able to acquire a glimpse of what was in the trunk. “Holy shit, that’s a cop!” I muttered to myself as I pressed my head up against the glass. The officer was busy with his duties as far as I could tell, clearing the area of any suspicious details, preparing the scene for investigators to scour and pillage through to find any dirt that may lead them to the truth of such a murder. I knew I was innocent, but also very confused.

A few minutes of introspection passed until another officer of the law arrived. The officer that cuffed me spoke to him for a short while, and then departed for his cruiser, arriving at the driver’s seat. He said looking toward the wheel, “I’m going to take you down to the station and book you . . . hey are you listening?”

As he turned to face me, I was well beyond a conscious state, I was jerking my head all around the inside of the car, foaming at the mouth while fidgeting to speak, “I . . . I think I have . . . been poisoned!” I wasn’t sure if I was going to make it out of this predicament alive when I started to feel a sudden rush of numbing pain flourish through-out my body.

“Hey!” yelled the officer to the other, “This guy is foaming at the mouth and is most likely going to die if he doesn’t get medical attention soon!” the other cop rushed over peering through the passenger window, “He doesn’t look good at all. He probably took something before you caught up to him; call the ambulance.”

Now, I don’t know if it was the mentioning of the ambulance that made me want to accept this poisonous fate, or the fact that no one would believe me that I wasn’t the one who caused that mess in the trunk of that police cruiser. All I had was a vague memory and a post-it note with nothing more than a general direction of where I was going. The facts that are known to these cops are as follows; there is a dead body of a police officer in the trunk of a stolen registered police vehicle that I was driving, not to mention 85 miles above the speed limit, and a soon to be dead suspect in the back of this police car.