Series I: Stand Off – Chapter 3: The More You Know. 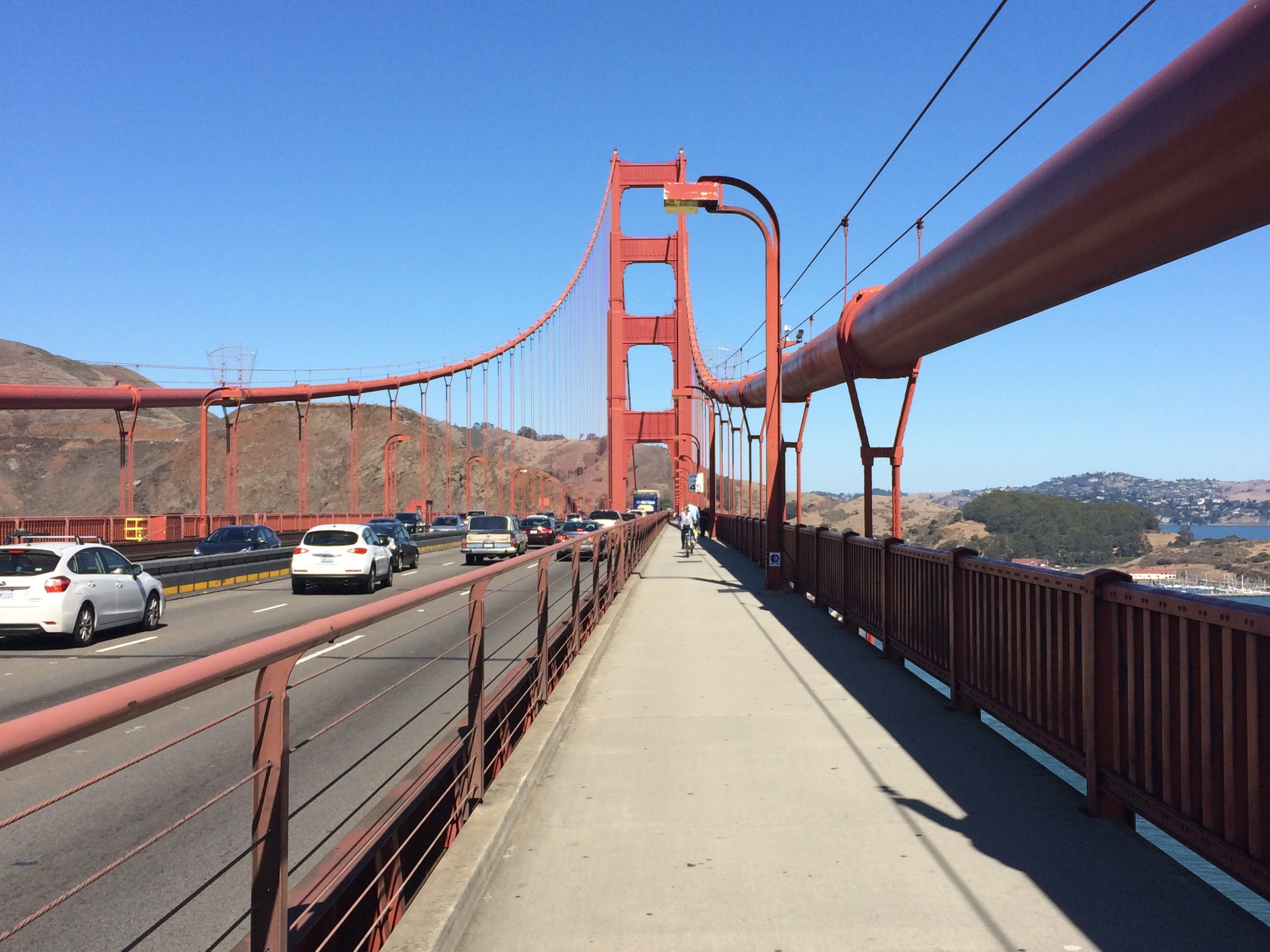 The ride was silent with Thomas still watching the lamp posts as he and Kristen passed them, driving down Geary Street. He counted them to himself until the numbers collectively became one drawn-out sequence, and as each number he counted began to lose its place-value, the sound of each number began to lose its meaning; until, all he found saying to himself were mumbles. Eventually, Kristen turned right off Geary Street and onto 17th. She pulled up to the rear of a car that was in front of a parking space, the space Thomas assumed she had left earlier to pick him up, and jerked the gearshift to reverse. She lifted her head up and rotated it toward the right passenger window to attempt to see the other car’s taillight. Both of her hands were still on the wheel at 11 and 2 o’clock.

“Tom, how close am I to that car’s taillight?”

She kept her head up and her chin out while both of her eyes danced along the right sides of her eye sockets in search for a clear view. Thomas swung his head around in the same direction where she was looking. He shifted his body in his seat by rotating himself toward the passenger seat behind him to get a better view of the distance between both of the cars.

“Yeah, you’re clear.” He said while still looking through the window.

Instead of Kristen easing the pressure on the acceleration pedal, she applied too much pressure on it, which throttled the car into the space prematurely.

“Easy, you’re gonna have ta . . .” The jerk from the sudden stop interrupted him, and simultaneously, Kristen expressed her frustration.

Thomas returned to sitting forward in his seat with his teeth clenched together and without anything else to say. She adjusted the car’s position for a second attempt by vigorously rotating the wheel in the opposite direction, and just before she applied the appropriate amount of pressure to pull forward into the street, a car zipped by, honking its horn.

“Jesus, Tom!” She slapped his arm with force. “You could have told me there was a car coming!”

The moment her hand made contact with his arm, a pervasive sensation of ire flourished him. The tension did not gradually increase. No, that would have given him time to cool down, to catch the tense surge before exploding. No-no, this strike was all that it took.

“WHAT THE FUCK KRISTEN!” Thomas’ voice rose to a new level, a level which reverberated off every surface in the car and crashed upon his and her eardrums like shock waves, “every time, every – fucking – time you do this!”

Kristen turned toward him and her face froze with a frightened yet appalled expression. Her jaw slowly dropped that exposed just a slim section of her upper teeth. Along with her jaw slowly dropping, every other nuance that gave her face life — what culminated to the image of her bubbly yet assertive personality — seemed to die.

The deathly expression in her face brought Thomas’ explosive response to asunder as well as his feelings that put the force behind it. They fell apart and dissipated into his now clammy countenance, which portrayed the fleeting of his anger. The red in his complexion turned to white as quickly as he digressed to wait for her to say something; but nothing was said, she just sat there like a deer in headlights.

He looked down, and stared at the dirty floor mat that his vomit-covered shoe barely touched. He wasn’t aware of trying not to touch the mat with that shoe until now. With this sudden realization, a relief of stiffness was lifted from his leg.

As he spoke, cutting through the doldrums of the car, where the air hung thick with the scent of vomit and all that seemed to be moving was the heat flowing out of the vents, there was a whimper . . . a faint muster of a whimper.

And then suddenly, what started as a mere whimper matured into a quick jarring sound that ruptured the silence and that ultimately flabbergasted Thomas. It was a short burst of distress vocalized through a sobbing mess. Within seconds, Kristen’s dead expression was soaked with tears. She didn’t move, just the tears did as they streamed down her face. They dropped with a trickle that ended with a “flop” onto the part of her jacket that folded outward as she started to slump over, right into Thomas’ lap.

“I was raped,” she said through the tears.

After those three words registered in his brain he fell apart inside and almost immediately felt as if he tore open a wound that he couldn’t have known existed until now.

Emotions surged, and he was filtering through almost every one.  And as they did surface, he tried to dismiss them as post-counter-parts of himself – the person he used to know – the person that would have caught Kristen as she fell into his lap. But, those counter-parts opposed to his contemporary self were released the moment she called him earlier that night. They were just dormant until now, yet he fought the urge to catch her so suddenly. He remained silent and motionless as she gently collapsed toward him. As she neared, he gently lifted his hand over and onto the top of her head.

The sobbing stopped and Thomas felt it right to ask, “it wasn’t George, was it?”

“No,” she said through the sobs, “can we just, make it inside, please.”

“Yeah,” Thomas ran his fingers through her hair and ravished in the silky smoothness of each follicle. He tried to ease the seriousness of her confession, but not in any vocal way. He just wanted to distract himself. He leaned toward her ear.

“Hey, uh Kristen, that vomit . . .” He said with the most sincere voice that he could muster.

She lifted her head up which made Thomas move back toward the head rest of the seat.

Thomas turned his head toward the street and noticed the faint street lamp brightening a small radius of the road, where her car wasn’t blocking, and of the cars parked on both sides of the road in an off-yellow light.

“We should park the car,” Thomas said.

Kristen looked around as she finished getting up from his lap. She seemed disoriented but aware that the car was still angled halfway out into the street. She wiped her face one last time and quickly put the car into drive, pulled it up a few feet, adjusted the wheel to the right angle – as if she knew the exact point where to stop the wheel – and then in one last fluent motion, she shoved the gearshift into reverse and reared the car into the space without any hesitation. The maneuver was completed before Thomas had time to say anything else about her car obstructing the street. Then she opened the door and shut it equally as fast, but just before she did, she managed to say,

Before he followed her with the same fluent exit from the car, he whispered an assuring, “alright” to himself.

Thomas stepped out of the car and studied her place from the curb. It resembled the architecture of a Victorian painted lady row-home with bay windows on the first and second floors. The design of the building’s facade was symmetrical from left to right and in between the bay windows there was a circular mural carved into a wooden piece that gave the home a warm sense of character. Along the bevel of the roof and all along the home’s edges were intricate inlays that appeared to replicate the growth of vines. Their color was white and complimented the painted bricks. They were bright olive green where the white trim of each window contrasted their color to an even more brightness. These bricks were fashionably layered and it was by this layering scheme that gave a youthful portrayal of the home. Houses of similar Victorian design were on both sides of her home, stretching down the block to its end. The colors of them were different, but none of them were as dull as the next one, and each had their own unique antiquated appeal, but revitalized for this century. Some had garages that were just feet away from the sidewalk with a stoop to its left that led up to its front door, while others only had the stoop up to the front door and no garage.

Kristen was already at the top of her stoop, flustered in the act of searching for the right key to open the front door. Thomas heard the keys clash together as he was approaching the stoop until he heard a final clash by the keys hitting the ground. She had dropped them and it was at this point that Thomas made his way to the top of the stoop. He did not hesitate to bend down for the keys as she did so as well.

“Hey, uh I know you aren’t OK, but just, try to relax.” He said as they both went toward the keys.

She started to sob again as she descended to the ground and as she bent her knees; she slipped her feet out from under her, which caused her to sit on the cemented stoop with her legs folded together along the right side of her body.  Thomas followed her down to the cement and sat next to her, brought her close to him by wrapping his arms around her chest, where she nestled her face into his chest and cried.

← The Quiet, The Insane, and The Guillotine.
Series I – Stand Off: Chapter 4 – Pulling Thorns →