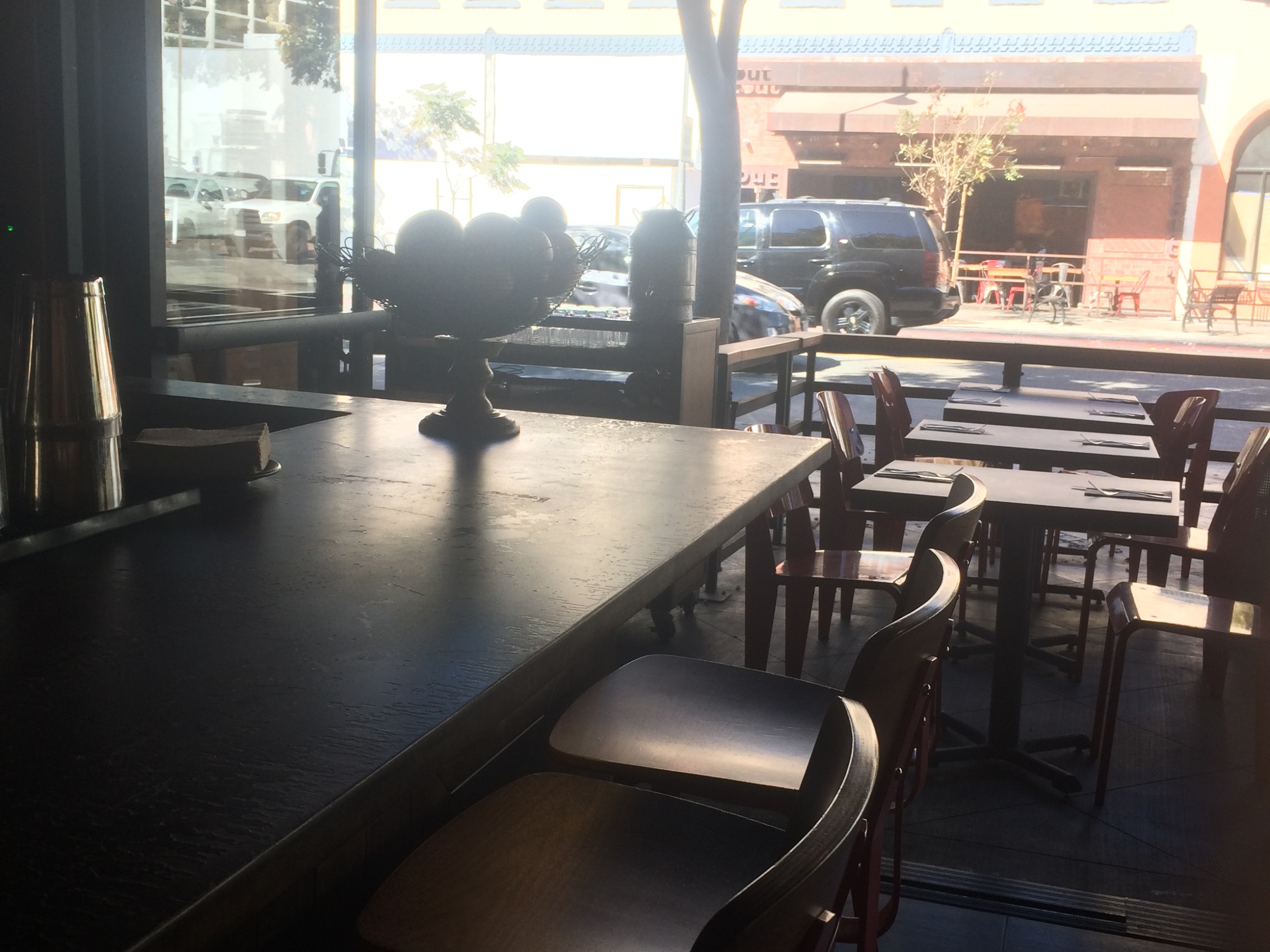 Thomas descended the steps to see that Kristen and George were sitting at the table. Kristen was at the head of the table closest to the stairs and when George spoke to Thomas, she turned around.

“The steaks shouldn’t take much longer,” George said and Thomas nodded. He didn’t smell anything cooking and made a curious face, which Kristen picked up on.

“They’re on the grill just outside,” she said and turned back to face George. They both were sipping on a red wine that Thomas didn’t want any of, nor did they offer. He just walked down to the table and sat between them.

“Thanks for washing these Kristen,” he said while looking at her and she curved an empty smile across her face, then  took a sip from her glass and placed it down again at the left of her plate.

“Thomas, what happened again? You said that some drunk at the bus station came up to you and vomited all over your leg,” George’s tone was less serious and carried a subtle charisma with it.

“Well that’s the bare bones of it, yes,” Thomas recognized his tone as skeptical, but did not acknowledge it, “but he came up to the only bench in the waiting area and shared it with me. He was nicely dressed and around my age,” Thomas’s eyes scattered across the dining room table as if he was looking for something, “he was pretty drunk and started to complain to me about the sharks . . . flyers game,” Thomas’s eyes flew to George as George quickly interrupted him.

“Ahh yes, Kristen,” he said looking at her, “how was the game last night?” Thomas averted his eyes to her and she exchanged glances with him before settling her eyes on George.

“It was fun . . . nice to know that I still bleed orange,” she said and grabbed her glass. She threw the remainder of the wine that was in it down her throat, placed the glass carefully down on the table and repeated that half-smile. George rested his back against his chair and smirked.

“I heard that they lost, ahhh brings me back to our college days,” George turned to Thomas and smiled and let out a heavy breath, “I’m going to check on the steaks; I like them still bleeding, you know?”

He pushed his chair out from underneath him and started to walk into the kitchen, toward the door that led to the back patio. Thomas watched him leave the dining room and then rested his eyes upon Kristen. He saw her smile at George as he passed her to enter the kitchen and when George returned the smile with his own, Thomas continued to see their dynamic transpire. Kristen followed George with that smile fading into an attentive stare until Thomas heard the backdoor shut, then she swiftly turned that stare to Thomas.

“I can sense your concern Thomas; just let it go,” Kristen said. Her eyes did not let up. They seemed distant from the person he used to know and a striking sensation of fear surged throughout his veins. The feeling of being interloped solidified within him and his anxiety began to grow. It went beyond that lazy smile.

“The flyers game,” he said and it came out like an automated voice.

Kristen kept her eyes rigid as they were framed within her eyelids and her pupils coldly pinned in the center, reflecting the low-dimmed light from the chandelier.  He almost lost himself and what he was about to say next while staring into them, but then he noticed her wince and his contemplation returned. The skin that revolved around her eyes was like ripples in a calming lake, caused by a disturbance of a pebble thrown through the glassy surface. She nodded.

“How do they look honey; they smell wonderful,” she said and George appeared into the dining room with a studious face peering down at the plate of steaks he was holding, coming into the dining room like a waiter with a rag slung over his shoulder. He looked up at Kristen and smiled, then at Thomas.

“They’re bleeding, just the way I like it,” George said. He placed the steaks on the table and reached for the wine before sitting down. “More wine dear,” he said holding the bottle toward her. Kristen raised her glass with a nod and he poured it until it almost trickled over the rim of her glass, then he brought the nozzle over his own and poured. Thomas watched the red wine glisten against the dull light of the chandelier as it exited the bottle and for a reason unknown to him, he tasted his heart beating right up into his throat.

“Forgive us for drinking in front of you Thomas, I hope it’s not a problem,” George turned the bottle a quarter, then up as if catching the final drop just before it had a chance to land on the fine white table cloth. Thomas waved his hand.

“No, please,” he said. He slightly shook his head in accordance with his hand gesture and then coughed.

“Oh forgive me Thomas,” George caught himself before he sat down and it seemed that he almost stumbled back into the chair, “Allow me to get you some water,” he said walking back into the kitchen.

“He’s fine George,” Kristen said, slightly raising her voice, “he didn’t ask.” She glared back at Thomas and the insecurity of his presence among them steadily increased. He fought it with a smile, but it dulled every point of his senses and that smile was just as devoid of intent as his auditory reception. George’s response to Kristen became white noise and he became the void in which it existed.

It wasn’t long until George returned with the cup of water and placed it to the right side of Thomas. The base of the glass clanged against the polished table where the white cloth buffered the sound. Thomas blinked and averted his eyes to the meniscus.

“Thanks,” he said and wrapped his fingers around the glass before the meniscus settled. He then drew the glass up to his lips and cradled it back with his head shifting toward the ceiling and his throat cleared when the water dribbled down passed his tongue. His gulps drowned out the initiating conversation between George and Kristen and he started to listen to it when he drew the glass away from his lips, down back on the table.

“So, how’s Corey,” George said while cutting through his steak.

“She’s doing well,” Kristen said with a piece of steak pitched on her fork and she was about to grab it off with her mouth.

Thomas watched her bite it as soon as she answered George. She smiled at him just before she started chewing and that smile was as sharp as the knife that George used to cut his own steak. It stopped in the heart of the steak and screeched the porcelain plate, which caused Thomas to dart his eyes toward it. He watched the blood seep through the succulent pink center of that steak and pore over to its outer burnt ridges.

“Thomas, I don’t think you ever met Corey,” George said while he finished cutting through the rough meat.

“Corey?” Thomas didn’t take his eyes off George’s steak until his question rolled off his tongue and when it did, he slowly looked up to George, meeting him eye-to-eye.

“She graduated with us and moved out here right afterward,” he said.

“Ah,” Thomas made a reflective pause, “yeah-yeah Corey,” he said with profound conviction and even though it wasn’t enough for himself to remember Corey, it was enough for Kristen and George to not question him about her any further.

They ate in silence with the lights dimmed to a serene humdrum and the echoes from their forks and knives hitting the plates, dicing the steaks and with the monotonous chewing in between, it drew Thomas to blink profusely.

“Hey, uh George,” Thomas said, cutting through the silence, “is it ok if I lie down?”

“Well, yeah . . .” he said and Kristen dropped her knife. She looked at Thomas as George looked at her. Thomas swung his head toward her and as they both faced her, Thomas was the only one that sensed the same feeling he had when he asked about the flyers game. It was his anxiety and it grew when that knife clanged against the plate like a strike of a match against red phosphorous. His anxiety sparked just as bright. They both waited for her say what Thomas thought her face was saying, but all that she said was what George was going to say.

“Take the guest room. Second door on your right,” She continued to eat her steak and sip her wine.

“Don’t worry about your plate Thomas,” George followed up with saying. He smiled and Thomas nodded, then excused himself and walked from the dining room table to the stairs. Before he took the first step, he looked at both of them.

“Thank you,” he said. Only George nodded and smiled before he cut into his steak again. Kristen remained silent, sipping her wine and she didn’t turn around toward him.