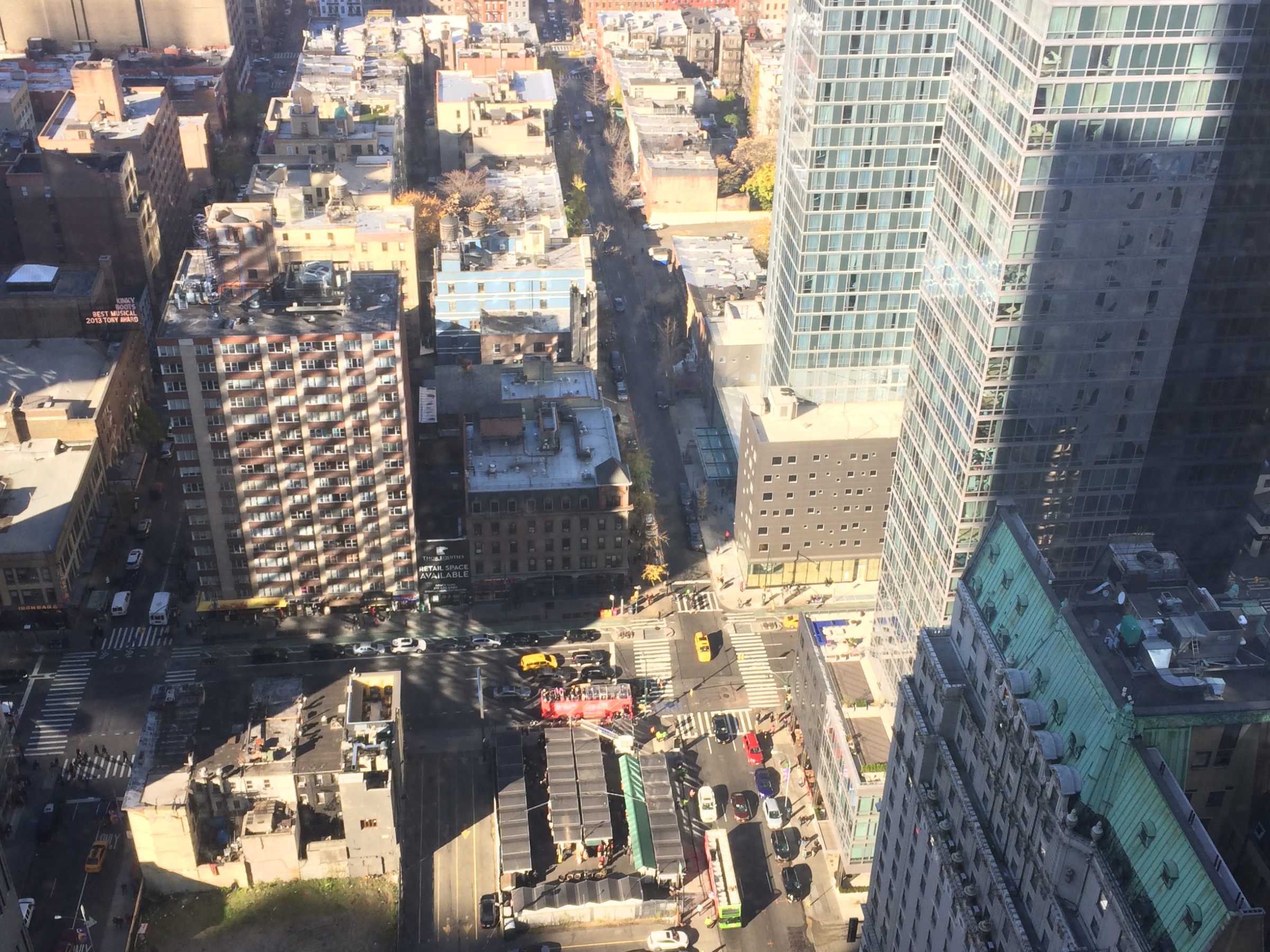 Thomas walked down the Victorian steps with his chin into his chest and his hands deep into his pockets. He had put his jacket on right before taking that first step down the stoop. When his feet met the sidewalk, the brisk air met his face and he shuttered from its abrupt kiss. It made his skin shiver with goose bumps and they traveled all the way to the tail end of his spine. They went away as soon as he reached the corner of the block.

He stared at the curb and slid his hand across from his front pocket to his back one, reaching for his wallet and drawing it out. He cracked the leather lips open just enough to see that he had no money and realized that he had spent the last of it on the cigarettes the night before. He soon regretted throwing the rest out, but he did not need that habit of smoking to reemerge into his life. He shook the thought off and headed in the direction of the bus station.

All that was on his mind were the previous events that were discussed last night during dinner and how each topic drained him to the point of requesting the guest room. That wasn’t the first time he had done that.

“We’re going to be late Thomas,” Kristen said. She was by the door yelling up the stairs. She could hear Thomas in the bathroom and without warning, its door slammed open.

“I know, I just need to get changed,” he yelled from the upstairs hallway. Kristen was looking up the stairs and saw the steam pluming from the bathroom and creeping over the banister. They disappeared before coiling over to the railing of the stairs.

“How many times have I told you; you need to time yourself in the shower!”Thomas heard that her voice was more instructive than irritated, and he knew that it wouldn’t be that way for very long.

“I know, I know – 5 minutes,” he said walking through the steam and into the bedroom at the top of the stairs. He didn’t look down the stairs where Kristen was waiting, but he felt her angry stare seeping into his back.

“I told my parents we will be there by 11 – you know that it won’t take an hour to get there because of traffic!” Kristen said. Thomas just shut the bedroom door behind him and started to get changed. “I’ll be in the car,” he heard her say through the door.

“Alright,” he said and his voice carried through the door as he searched in the closet for a suit to wear. His hand landed on a grey satin blazer with the pants folded and hung inside of it from the hanger. He threw it on and ran down the stairs to met Kristen in the car.

His shoes clapped down their apartment steps after he had closed and locked the front door. He arrived at the car with Kristen in the passenger seat. She looked at him through the window and motioned him to go around to the driver’s side. He wrapped around the car and opened the door, sliding into the driver’s seat with his head tucking down into the car.

“You know to take route 30 onto 295,” Kristen said as she kept her eyes forward. Thomas just nodded and went to turn the key that was in the ignition. He cranked it and the engine fluttered. “The car’s already on Tom!” She shouted.

“Well shit,” he said. Thomas sighed as he put the car into drive and then pressed on the pedal.

“I can’t believe you,” Kristen said, “It’s like you don’t even care.” Her eyes began to water and Thomas sensed her voice peak into a higher pitch with the back of her throat gripping the far back of her tongue.

“What are you talking about; I do care,” he said.

“I just lost track of time,” Thomas said. He was hunched at the wheel, holding it with one hand at 12 and the other at his stomach. Kristen looked down at his other hand.

“Don’t tell me you’re sick on Christmas,” she said.

“It’s just something I ate,” Thomas said and continued to hunch further into the wheel as he drove.

“What you do mean? We had chicken and rice last night; that shouldn’t have upset your stomach?” Kristen leaned her head out and faced him.

“Nah, the pain’s only minor. This happens when I am stressed,” he said.

“No, don’t do that Tom,” Thomas heard her voice slip into a mild tone of hysteria, “I am still angry at you and if we miss this dinner . . . I wasn’t with my family for Thanksgiving and I want to be with them for Christmas.”

Thomas looked over and she turned her face to the passenger window. She brought her hand up to her eyes and wiped both cheeks.

“We’ll get there,” Thomas said as he accelerated, still hunched over.

The road narrowed off from the suburban sprawl and poured onto the causeway that fed into Camden. He accelerated on this causeway.

“Don’t go too fast, you’ll miss the entrance,” Kristen peered over the dashboard, ‘it comes up sooner than you think,” she said.

“I’ve taken it many times, I know to look for the Applebee’s then it’s the second bend on the right,” Thomas said.

“Yeah well, you missed it last time,” Kristen said shooting a glare at him. Thomas only smiled. He began to breathe heavily while still hunched over.

“Do you want me to drive?” Kristen said. She seemed to become concerned.

“Nah, it will pass,” Thomas said. He kept his eyes on the road and before the pain did pass, he made the entrance without another word about it.

The pain in his gut came in waves. It struck like steam from a hot iron that was pressing up against the insides of his guts. The scenery helped keep his mind off these undulating spasms until the trees that lined the turnpike wore thin. He and Kristen had cleared the southern part of New Jersey.

“Let’s listen to a podcast,” Kristen raised her phone’s screen closer to her face, searching the app for a channel.

“OOO,” Kristen brought her phone down into her lap as she squeezed her thighs together. “I know just the one,” she said, “I started listening to it last week; it’s called Myths and Legends.” Thomas glanced at her and took part in her excitement with just a smile.

“Well, the last one I listened to was about a doll that haunted a family for generations,” Kristen said.

“Whaaa,” Thomas’s voice sustained a monotone pitch and Kristen took him as sincere.

“Yeah, the family believed the doll to be alive and kept it on a chair up in the attic.” Kristen kept searching through her phone, “if only I can find it . . . here it is,” her eyes lit up.

“Wait, why not just destroy the doll?” Thomas said.

“The family, why didn’t they just destroy the doll,” Thomas said.

“Because the doll possessed the family; why would the doll want to destroy itself,” Kristen had her phone in her hand as if it was part of her arm.  She raised both hands toward the windshield in a gesture that implied his response lacking in common sense.

“Sure why didn’t I think of that,” Thomas said and the pain in his gut came back.  He winced at the pain, but Kristen didn’t notice. She just played the podcast.